There is just 98 days until Barnsley and Britain prepare to welcome the world for the biggest sporting event on the planet. 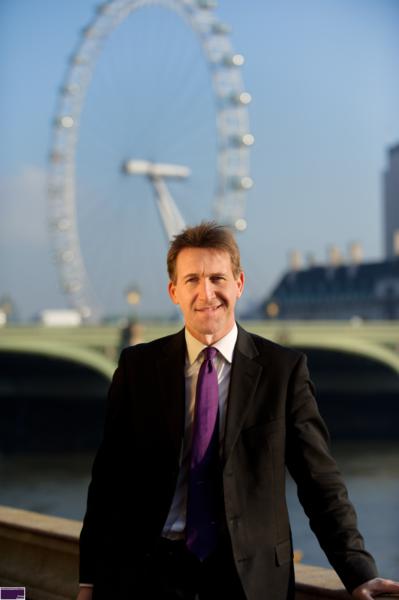 This morning, Dan gave a speech to Barnsley College, on the importance of Sport & the Sports Leaders Programme

The Olympic Games were secured, in part, because Olympic organisers knew, that Britain is a country with a passionate sporting history and a desire to achieve more.

We gave the world football.

We gave the world rugby.

And we are still trying to give the world cricket!

And when the decision to award Britain the Games was made, it was done so on the understanding that Britain would invest in the sporting talents of our people.

60% of all school children to be doing 5 or more hours of PE.

And over 2 million people more physically active today, than in 2005.

That was our aim.

So as we prepare for the countdown to stop,

and the Games to begin,

Barnsley can prepare itself to witness a year of sport that we will never forget.

But, in Barnsley, our countdown started in 2008.

And I am enormously proud of the partnership that has built cultural links between schools from our town and the Olympic borough of Newham.

Recently, I spoke with Lord Seb Coe – one of my own childhood sporting heroes.

He told me that he was delighted that the Newham-Barnsley Partnership was maximising the potential of the Games and ensuring the Olympic legacy endures.

And, today, we meet to celebrate that Barnsley College Sports Leadership Academy has achieved accreditation through Sports Leaders UK – A fine achievement.

In Barnsley, we have seized the potential of the Games by exploring ways that we can get young people involved in a diverse range of activities and skills, which are related to the Olympics and sport more widely.

Of course, the Games are not just about the 10 runners that will line up for the 100 metres final.

And to ensure that this comes to fruition, we need coaches to prepare our athletes for the Olympic Games in 2016.

I hope the young people here today, see that as an opportunity.

And, it is a credit to the Sports Leadership Academy that so much work has been done in Barnsley, in the community, by their students.

As part of their learning, Students work in schools and with organisations across the borough.

They have worked with the Rotary Club to provide activities for the Children of Chernobyl, when they visit Barnsley.  A visit that is so vital and has such a huge impact on these children, it actually increases their life expectancy.

The Sports Leaders gain experience in working at large-scale events, such as the South Yorkshire School Games, which was recently held for the first time at the English Institute of Sport, in Sheffield.

Here are young people from Barnsley, making a difference, contributing to our community, even before they have qualified.

I believe it is absolutely vital that young people in Barnsley are allowed to realise their full potential.  The education they receive through the Sport Leadership Academy, sets them onto the path to doing just that.

Because in Barnsley, when our young people achieve,

When they look to the future,

We must all be there to support them

I believe each of us has a responsibility to support and empower our young people.

And, it is a credit to the Sports Leadership Academy that so much work has been done in Barnsley and across the Town by their students.

So far, the Sports Leaders have worked with over one thousand pupils from 40 primary schools in Barnsley, leading on activities for them to enjoy and learn from, in their schools.

Remember; passion and determination is not something that is in short supply, here in Barnsley.

You know, I have always thought, that sport has a habit of breaking down boundaries and opening up doors of opportunity.

Look at football for example.

It doesn’t matter where you were born,

Where you went to school,

how much your parents earn,

or what nationality, colour or religion you are;

In football none of that matters

if you’re good enough, you can make it.

Rooney grew up in a small house in Liverpool, not too dissimilar to the houses that many of us live in. His parents weren’t rich but he had a talent.

And he had a determination to succeed.

This summer he will play for England in the Euros.

The Chelsea striker grew up in the slums of Africa and this week scored a goal in the semi-final of the Champions League that saw Chelsea beat Barcelona.

There are also many success stories of people from our town that have achieved great things,

We have many Olympians, including Ed Clancy, who in the lead up to London 2012, has achieved a Gold Medal and a world record in Melbourne this month.

We have Geoffrey Boycott, who played for Barnsley Cricket Club, before becoming a world-class player.

We have Ellen Whitaker, world-class show-jumper

And, of course, we have triple Olympic medallist Dorothy Hyman.

Sport breaks down boundaries – and offers opportunities – at every level.

And that can happen and is happening here in Barnsley too.

We can use sport and the sport leaders programme, to train young people to be the coaches of tomorrow.

We can use sport to inspire Barnsley’s young people to become the sports leaders of tomorrow.

In 98 days time, we will watch men and women from all over the world, run faster, jumper further and throw farther than ever before.

All of which will be captured on the Internet and on TVs and Radios around the world.

In September I announced that I was initiating an Olympic Digital Bursary scheme.

Today, in conjunction with the Newham-Barnsley Partnership, I can announce that applications for this bursary scheme are now open.

Each successful applicant will receive a five-hundred-pounds fund for travel, work and equipment this summer.

They will also have access to the Digital Media Centre and, most exciting of all, they will have access to events, athletes and venues at the Olympic Park.

Additionally, leading media professionals and academics from the digital media sector will be on hand for expert advice and support.

Barnsley has led the way in shaping our own Olympic legacy.

The Digital Media Skills Bursaries will be a part of that.

My hope is that as many people as possible will apply so that the 2012 London Olympic Games, will be one we never forget.

Sports Leaders’ have a proven track record of inspiration and delivery, not just in sport but in society more broadly.

Seeing first-hand the impact that being part of an after-school sports club can have on a child,

The benefits to social inclusion and an individual sense of achievement and belonging,

The great strength of Barnsley and its people is rooted in resilience and determination.

This has seen the town through some pretty tough times over the years and it is from this, that we get the incredible community spirit here.

The Sports Leaders at Barnsley College are continuing in this tradition and helping people in communities across the borough.

Sporting achievement and contributing to our community, what an incredible legacy is being built here and I am honoured to have been asked to be a part of it.