Since becoming Barnsley Central MP, Dan has had a plethora of conversations, emails and letters from constituents on the problems they have faced with loan sharks. 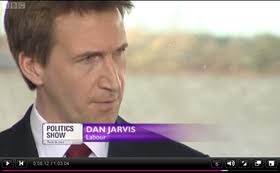 Dan Jarvis has joined calls for the Government to get a grip on problems caused to consumers in South Yorkshire by high-cost lending.

After months of delay, MPs will today seek to put renewed pressure on ministers to address the problems caused by payday, doorstep and other high-cost lenders by voting for an amendment to the Finance Bill.

Speaking ahead of the vote, Dan explained, “We know families across Britain are struggling financially as a result of this Government’s austerity measures, and many are turning to high cost credit lenders to make ends meet.”

“Payday lenders, home credit companies and hire purchase shops charge astronomical rates legally to families in Barnsley and South Yorkshire, causing many to get into debt as a direct consequence. It’s time the Government stepped in before this gets out of hand.”

Moneysupermarket.com has seen a 58% rise in applications for payday loans in the space of one month, payday lenders like Wonga and the Money Shop – as well as rent-to-buy stores like BrightHouse – have announced massive expansion plans, and the evidence shows rising living costs are causing more and more people to take out these expensive and debilitating loans.

“Despite these problems, this Government refuses to do anything to tackle the rates these companies charge, despite the fact this type of lending is tightly regulated across Europe and North America. I am voting in favour of this amendment, to force the Government to look seriously at how to protect British consumers by intervening and protect the finances of families here in Barnsley and South Yorkshire.”