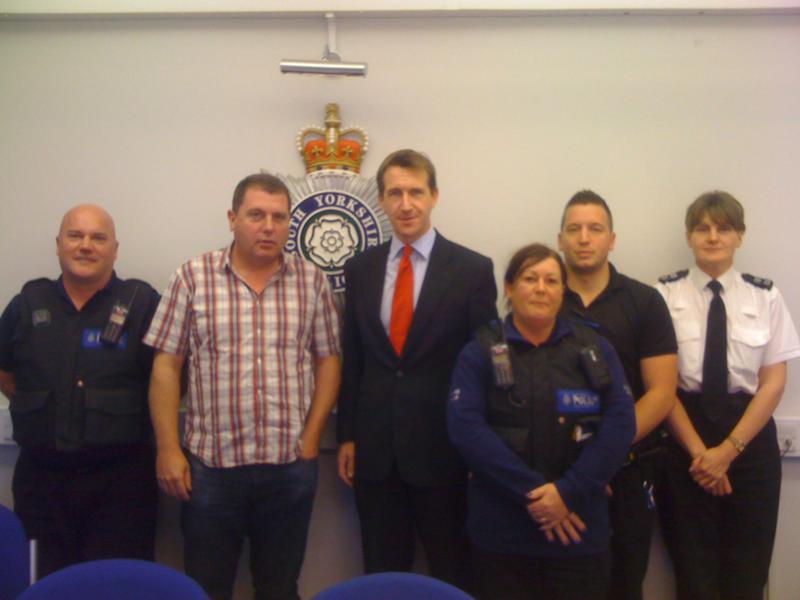 Speaking afterwards he explained, “Cuts to the frontline police budgets have been debated for months in parliament and in the media. Leading police officials have said that they are dangerous and they risk seriously damaging the police’s frontline capability, whilst Theresa May is adamant that no frontline police officer will lose their job as a result of these cuts.”

“Many issues were raised. From anti-social behaviour and the effect of increased unemployment, benefit cuts and the loss of sure start, and changes to society; they are all issues which are making the job of a South Yorkshire police officer all the more difficult.”

“When I left the room, I was sure about one thing; these reforms will undoubtedly reduce the number of frontline police officers we have in Britain.”

“And there is something which has, in truth, been lost amongst the debate, and that is that the cuts will also mean that we lose a vast amount of police experience. Police officers spend years working with communities, to target areas of crime, target persistent offenders and help keep our communities safe. It takes years of experience to learn the “tricks of the trade” and become streetwise in policing. It is also experience that senior officers are able to teach younger officers, indeed it becomes an extra element of their training.”

“South Yorkshire police will have to cope with a 5% reduction in overall experience each year from 2011 onwards. In essence, the government’s determination to cut police budgets by 20% will mean senior officers are forced into early retirement and redundancies resulting in the loss of a fundamental dynamic in our police forces.”

“And the police in South Yorkshire have every right to feel aggrieved by these cuts. The last Labour government was the first government to leave office with crime lower than when we took office since the Second World War. In total, crime fell by 43% under Labour and South Yorkshire police officers played an integral part in that. Now, under the conservatives, they will lose £40million from their budgets with 500 frontline polices officers being made redundant and nearly 1,000 support staff also losing their job. Across the country it means that by 2015, we will have 16,000 fewer frontline police officers. It is no wonder that crime reduction rates have stalled under the Tories.”

“The Conservatives want everyone to believe that there is a fundamental problem with the police and that there is far too much bureaucracy. They claim we have too many police administrators doing non-essential work. It is a narrow-minded view that shows an alarming naivety when it comes to frontline service. Labour reduced crime because we understood that to tackle it we needed far more than just an increased number of police on streets. Yes that helped, but the police’s success went hand in hand with a more strategic approach to tackling crime across a number of different government departments.”

“Labour understood that in order to reduce crime, you had to improve people’s standard of living and enhancing life chances. And that’s where the Conservative’s must face up to their biggest justice flaw. Today in Barnsley, families are struggling to get by because of the cost of gas and electricity bills, the rise in VAT, the rising cost of petrol, high unemployment and low wages. And we’re not alone. Barnsley’s story is indicative of towns and cities across this country.”

“The Conservatives must get real over crime. They must see the bigger picture and adopt a cross-departmental strategic approach to policing. We cannot allow people to feel helpless and feel that a life of crime is the only way to make sure their families survive these tough economic times. In the same way that we cannot allow a Home Secretary to make devastating cuts to police numbers without consulting the Justice Secretary on overall crime policy.”

“The 20% cut to police budgets is drastic enough, but the message from the police today was that cuts to the communities and local government budget as well as the Justice budget, equates to rising pressure on the frontline.”

“So all in all it would appear that in these tough times, the government are expecting more and more of our police but are only willing to give them less and less. The officers I met today all, deserve so much better.”