Barnsley Central MP, Dan Jarvis, has reacted to today’s announcement that the number of homeowner’s in England is at the lowest since the 1980’s and projected to fall further, by saying “more leadership is required from the government.” 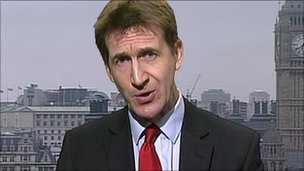 The National Housing Federation have anticipated that in 2021, owner-occupation rates will be lower than they were prior to Margaret Thatcher becoming Prime Minster and Jarvis made clear his concerns, “There are thousands of hard working people across Britain to whom today’s news comes as little surprise. We have a real problem in this country with housing and if it is not addressed immediately then there is a severe risk that an entire generation of young people will be frozen out of the housing market for the rest of their lives.”

“At the moment, we have situations where people have to save up to 30% of the house value as a deposit. This is an incredible sum of money for anyone to have to try and save especially when we consider that the cost of living is rising, wages are falling and youth unemployment is at a record high.”

The former Army Major then attacked Housing Minister Grant Shapps by explaining, “For some people in more affluent parts of the country, the “bank of Mum and Dad,” may well be the solution to their problems, but for most young people in Barnsley that isn’t an option. We need the government to show far more leadership on this issue. It is simply not good enough to introduce a scheme and then sit on your hands for a year, hoping that it works. Grant Shapps should be releasing monthly updates on the number of houses being built, sold and outlining what he is doing to force mortgage lenders to relax some of their lending criteria. Banks have got to start making it easier for people to buy homes.”

Jarvis is, however, aware that even under the previous government, the housing market’s problems were mounting, “The equation that needs solving is this; we don’t have enough houses but we do have developers ready to build more versus plenty of young, potential homeowners, that don’t have the money saved for a deposit on a house. Therefore developers are reluctant to build homes that they wouldn’t be able to sell in the current mortgage climate. It is a vicious cycle that needs breaking and I don’t pretend this is easy or a quick fix. It cannot be right, however, that we are building less houses today than at any point in the post-war period given the rise in the number of people renting and living at home with parents.