The Labour party conference is always a very special week in my calendar and this year it is even more special. It is my first as the Member of Parliament for Barnsley Central and it is the first time in living memory that the party has visited the wonderful city of Liverpool.

Just walking around near the Albert dock emphasises even more, just what I know a Labour government can deliver for towns and cities across Britain and it makes me even more determined to ensure Labour return to government in 2015. Liverpool is a city transformed by 13 years of Labour investment and the atmosphere at conference is fantastic.

This year is extra special in that Labour have opened our doors to the public. In my opinion, the Conservatives didn't win the 2010 election, but I am certain Labour lost it. So we have to engage with voters and find out what they want the Labour party to be doing as we prepare for government again.

In the past twelve months, the Labour party has acquired 65,000 more members, 800 new councillors and we have spoken for ordinary families across the country in parliament. By any Opposition's standards, that is a first class first year. Ed Miliband has driven this change. He is taking Labour on a journey and he is doing it his own way.

Last night, I was delighted to have the chance to visit the regional receptions where I had the opportunity to thank many friends and members who had helped me during the March by-election. Representing the people of Barnsley in parliament is a great honour and I thank everyone who helped me to make it possible. 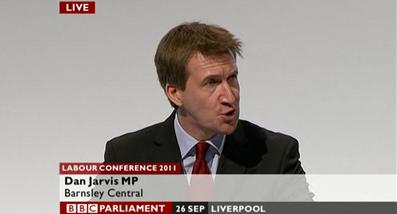 This morning I addressed the conference as I introduced Labour’s Shadow Defence Secretary, Jim Murphy. I was grateful for the chance to bring my experience to conference and dispel the myth that the Tories are the party of the forces. In an army career spanning twenty years, let me tell you, it was the Labour party that truly spoke for the forces.

So that is why Jim and Ed have announced that anyone in the Armed Forces can join Labour for just £1. Morale in the Army is the lowest it has been for a generation. The Conservative and now the Liberal Democrats, have both lost the trust of the rank and file of our Armed Forces. So we need to make sure we speak up for them. That's why Ed and Jim also announced the creation of the Labour Friends of the Forces group which I am honoured to be the first patron for alongside George Robertson.

Each day of Conference, I will be taking part in debates and discussion so that I can talk to as many Members and members of the public about their concerns and fears as well as their ideas and values.