Dan Jarvis, Labour’s candidate in the Barnsley Central by-election joined Nicola Smithson, the newest apprentice at Barnsley based Fosters Bakery, for a tour of the company’s Mapplewell factory. 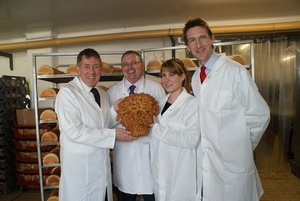 Nicola was offered an apprenticeship with Fosters’ after winning a bake-off organised by Barnsley College to help the company find the next generation of Barnsley bakers.

After meeting Dan, Nicola revealed that she will be voting for Dan in the forth-coming by-election and that it will be her first ever vote.

"It was great to be at Fosters bakery meeting new apprentices like Nicola.

"Strong local companies and the talented people who work for them should make us all proud of Barnsley.

"This Tory-led Government is letting down young people by scrapping Labour's guarantee of an apprenticeship place for every young person who wants one.

"This government has no plan for jobs and growth."